skip to main | skip to sidebar

The Elephant In The Room 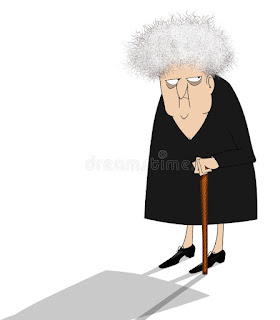 There’s a woman at work… I can barely bear listening to her voice no matter what she’s saying. You’ll already know her. Yours might be a man or it might be a girl or it might be this very same person.
That person who crawls over anyone to get ahead, who is outraged at every fucking thing and thinks only they, possibly in the whole history of the world, the solar system, the galaxy, the universe or just at your office has the wherewithal to deal with the matter at hand.
“Sweetie”.
This matter at hand may in fact not exist, it may not matter or it may just be none of her fucking business.
Having no true power, no actual authority, one needs to committee up. A joiner. Not so much to help those lesser folk that populate the space around her, but to bring things into line. As only the insightful mind would recognise to be the correct alignment. Or perchance, it might enable a person to rub shoulders with those who do have actual authority and facilitate one in the use of their names, copiously, affectionately.
"He’s a honey". "Oh Jonathon, I love Jonathon"!
Or to reveal (as it should be seen) the amazingness, the insightfulness, the obvious wisdom and darling nature that every fucking other person seems not to fucking notice. For fucking fuck’s sake.
So, said person throws me under a bus. Well, not just me but all of us here, by telling the biggest boss (the one under the very biggest boss) that we are inefficient, unprofessional, probably criminal and a little bit smelly. Quite, quite smelly.
Using me as the perfect example, for knitting inappropriately with guts and sinews on slithers of bloodied glass.
But, she felt later, there was a moment between us. A sense of solidarity with another, also depressed by events. Me, because my colleague, in an act of betrayal, invoked a restraint, a control over me and now I’m bored to fucking death and really fucking annoyed, and she because everyone (from their gruesome tangled heap, under the bus) acted like they thought she was a fucking stupid idiot.
A shared moment. A glance, a motherly, sad, pursing of the lips. Her lips, not my lips.
When there’s an elephant in the room, I can’t talk to it without mentioning the big shit it just did on the floor or how it stomped on a small puppy and the owner is screaming with horror while flies buzz about, birthing maggots into the warm flesh. Naturally I don’t want to talk about that and rather, I ignore her.
But now, every time I walk by, I see these little, sad, worried glances and her mouth is Zipped. She’s not sure what to do and I think FUCK! I think it again, groaning. Fuck! Leave… me… be!
So, next time someone says something funny or stupid I glance at her and roll my eyes, shaking my head a little and she cackles overly loudly with relief and makes me cringe, but also I feel deeply, momentarily, the pathos of her need.
Thank fuck I won’t be getting little startled glances anymore because she thinks we’re cool now.
But I go quickly, before it gets sticky, and I’m pretty sure I’ve let the joker back out of its box because all I can hear is her voice.
Posted by Bobby La at 2:32 AM

Bobby La
I'm a reasonable human being I think. Friendly type, you know. Happy in myself. Clever and a little bit stupid too, depends where you look (hope I got it round the right way and it's not 'I'm quite stupid and a little bit clever??' That'd be awful). I like the other humans and want you (especially you) to be my friend. Please?